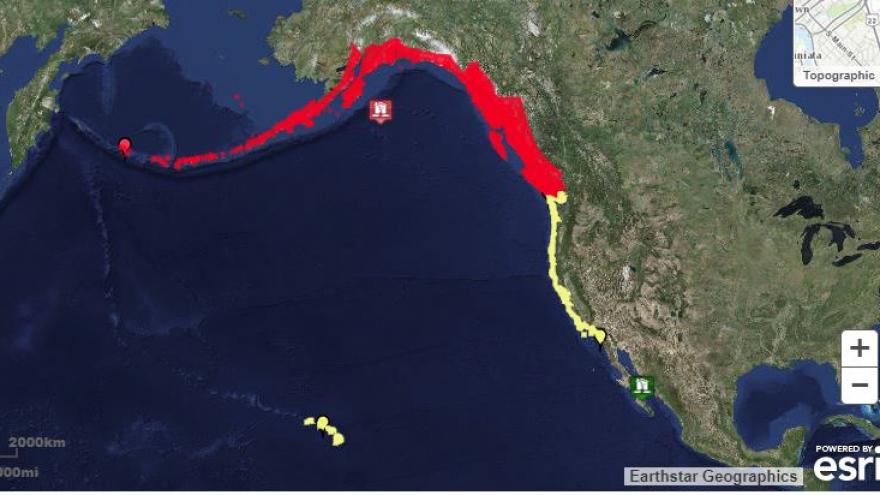 ANCHORAGE, Ala. – The tsunami warning, watches, and advisories for the southern Alaskan coast have been canceled after a 7.9 magnitude earthquake shook the region around 4:31 a.m. EST Tuesday.

According to the United States Geological Survey, the quake happened approximately 175 miles southeast of Kodiak near the Aleutian Trench where the earthquake occurred on a stike-slip fault.

A tsunami warning was issued by the National Weather Service for the Aleutian Islands, Alaska’s southern coast, and British Columbia’s west coast. All which were downgraded to advisories by 7:30 a.m.

Tsunami watches were canceled along the U.S. west coast.

Residents in towns along Alaska’s coast were forced to evacuate.

The NWS did report tsunami activity around data buoys, however the wave no longer poses a dangerous threat to communities along the coastlines.

Alaska Governor Bill Walker issued this statement in at tweet at 6:53 a.m., "We are closely monitoring the earthquake and tsunami warnings affecting many coastal communities this morning. I have been in contact with local officials, residents, and Major General Hummel and will remain in close communication with them throughout the day. Please heed to local warnings to move inland or to higher ground. My thanks to first responders and media outlets across the state for going beyond the call of duty to keep Alaskans safe and informed."

NWS says a tsunami advisory means that there could be a wave capable of producing strong currents dangerous to people near the water. The first wave may not be the largest.

Homer, Alaska is expected to be the most affected by this event.