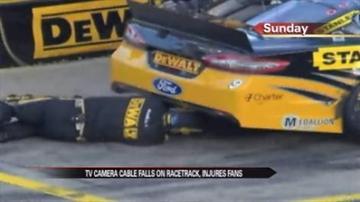 CHARLOTTE, N.C. — It was a scary situation for NASCAR fans Sunday when a TV camera cable broke and fell across the racetrack, and injured ten fans.

It happened in the 121st lap of the Coca-Cola 600 at the Charlotte Motor Speedway.

One of the cars clipped the camera cable, which then got tangled underneath another car. Race officials soon stopped the event.

"I thought the cable was unbelievable. I've never seen anything like it. I came off of turn four, and saw it wrap around Kyle's car. It hit mine and I thought I just had to be seeing things, there's no way a cable could be down on the racetrack," said Kahne.

Fox Sports says it does not know what caused the mishap. The company will look into what happened and the use of that camera has been suspended.