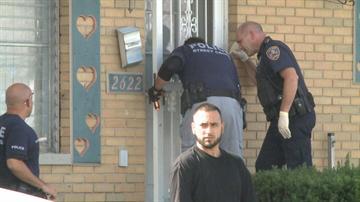 SOUTH BEND, Ind. – Twelve shots were fired in a drive by shooting on Ford Street in South Bend on Monday morning. Police said at least four people were outside in front of the house near the intersection of Ford and Meade Street when shots were fired. 30 year-old Jorge Lopez, who lives at the home, was shot in the legs and taken to the hospital.

Police said they arrested the suspect 28 year-old Freddie Smith within thirty minutes of the call thanks to a description. Police made a traffic stop in the area, near Poland and Walnut, where they made the arrest.
"To get a description, a name, and then a vehicle description and be able to go within a few blocks and find our suspect right away you don't get lucky like that very often,” said Captain Phil Trent.
Police said it appears Monday’s incident was an indented target."Because this individual was able to name the suspect. It appears right now that it was a dispute that was between the two or at least someone at this residence and this individual we don't think at all it was random,” said Trent.
People in the neighborhood are backing up the police statement. Many neighbors said violence has been an issue in the neighborhood for many years, which has many worried.
"It’s only about a block away from my house and my fiance's house, and when we’ve got grand-kids coming over, and I got two grand-kids, and I'm worried it’s going to end up one of these kids, young kids, is going to get hit,” said James Kwist.
Kwist said the violence in the neighborhood seems to keep growing and they need help to put a stop to it.
“People around here need more help or if it comes down to it get more police on the force,” said Kwist.
Police said Lopez’s injuries appeared to be non-life threatening.
Share this article: