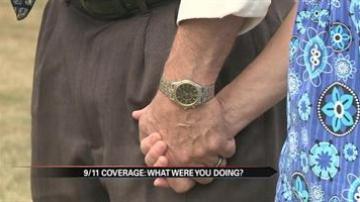 ELKART, Ind.-- People from across Michiana shared memories of where they were and what they were doing on September 11, 2001.

As an act of remembrance and pride, Elkhart veterans stood to salute the American flag. As a Vietnam veteran, Andy Williams described his feelings as "hurt" when he first turned on the TV that morning.

“In fact I even considered going back down and trying to get back in or doing something to try to help them out,” said Williams, Vietnam veteran and chaplain for Disabled American Veterans.

Today marks twelve years since the September 11th attacks, but everyone remembers where they were--down to the very last detail

"I was in the office at the time and then they announced it,” said Williams.

“I was in Sturgis, Michigan working on a roof of a church,” said Sammie Yoder, Elkhart Emergency Management.

"I was working. I was in Harrisburg, Pennsylvania,” said Chuck Ornduff, veteran.

“On 9-11 me and my wife were walking through my living room,” said Donald Fisher, Army veteran and creator of “The Wall of Heroes".

They were all glued to the television, re-watching the same heinous act over and over in disbelief.

"We just were glued to the couch and couldn't believe it,” said Fisher.

That’s why Fisher created the memorial called “The Wall of Heroes.” More than one hundred pictures of fallen soldiers from right here in Indiana.

"We followed the news real close in Iraq and Afghanistan. That's what determined me to build this wall. I said somebody should build a memorial to remember these young men, women who have given their lives over there,” said Fisher.

And on the twelfth anniversary of that tragic day, community members gathered once again to remember.