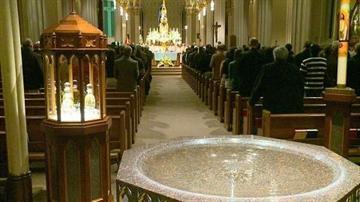 NOTRE DAME, Ind. – Twenty years ago Haley Scott DeMaria never had the chance to pray with her teammates at a memorial service following the tragic bus accident that took the lives of two of her friends. Tuesday night, she finally had that chance.

The Basilica of the Sacred Heart at Notre Dame was full of family, friends, survivors, teammates, first responders, and community members who wanted to remember Meghan Beeler and Colleen Hipp; the two Notre Dame freshmen died in the wreck on Jan 24, 1992.

Father Malloy delivered the Homily during the service, a service similar to one he conducted 20 years ago.

It was an intimate opportunity to remember the accident, its victims, its survivors, and the people who came to their rescue. It also gave those in attendance a chance at closure.

Haley Scott DeMaria was friends with Hipp and Beeler. All three were freshmen at the school; new to collegiate swimming.

The girls had a strong bond of friendship, despite only knowing each other for five months.

DeMaria remembers bits and pieces of the accident. She remembers laying in the snow, and telling teammates she was cold.

Nearly everyone on the bus suffered injuries. DeMaria was paralyzed for a week following the accident, and initially doctors told her she would never walk again.

DeMaria missed the original memorial mass held the day after the crash in 1992. She says, it was a difficult not to be with her teammates.

That is why, nearly 20 years later, when she found out a memorial service would be held, she made plans to be there. “I knew this is where I needed to be; I can’t imagine being anywhere else today,” said DeMaria.

DeMaria was able to learn to walk again, and even returned to competitive swimming for Notre Dame. She also wrote a book about her experiences.

There are plans in the works to bring that book to life on the silver screen. A desire to film portions of that movie, titled Two Miles From Home, on campus.