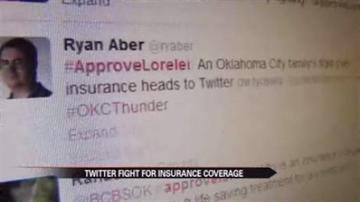 OKLAHOMA. -- An Oklahoma cancer patient is taking her fight to the internet, on tweet at a time.

The teen with Hodgkin’s lymphoma needs a stem cell transplant. She has tried chemo but says this transplant is her only hope.

So when her insurance company refused to pay up, her family and friends called that company out online.

"I said, 'What the heck?' I said, 'Why' and they said, 'It's considered experimental,'" said Andrea Decker, mother of cancer patient.

"I don't receive this treatment I will die," said Lorelei Decker, cancer patient.

The Twitter attack may have worked. Blue Cross Blue Shield says it may change its decision.