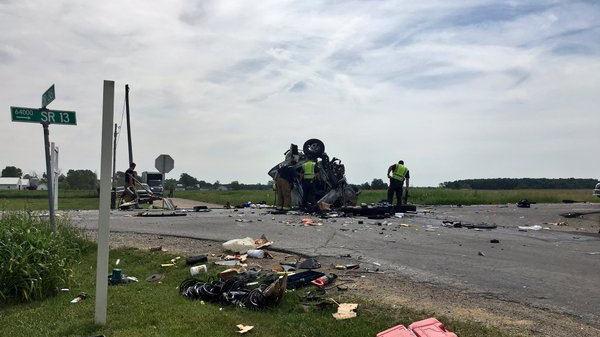 Three vehicles, including a pair of semi trucks, crashed Tuesday morning around 10:15 a.m. at the intersection of State Road 13 and County Road 36 near Millersburg.

Our reporting partners at the Elkhart Truth report multiple agencies responded to the scene, including the Clinton Township Fire Department and fire crews from Goshen and Middlebury.

According to the Elkhart County Sheriff's Department, three people suffered serious but non-life threatening injuries, two of which were air-lifted to Memorial Hospital in South Bend.

The impact pushed the semi into the northbound lanes where it collided with another semi, driven by a 52-year-old man.

The driver of the van and a male passenger were air-lifted to Memorial Hospital with non-life threatening injuries. The driver suffered from fractures to the pelvis, ribs, and left ankle and the passenger, a 38-year-old man, suffered from lacerations to the head and a broken neck.

The 52-year-old driver of the semi was taken to IU Goshen Health with a broken arm.

The 59-year-old driver of the semi did not complain of any injuries.

The Elkhart County Sheriff's Department says the accident is still under investigation.