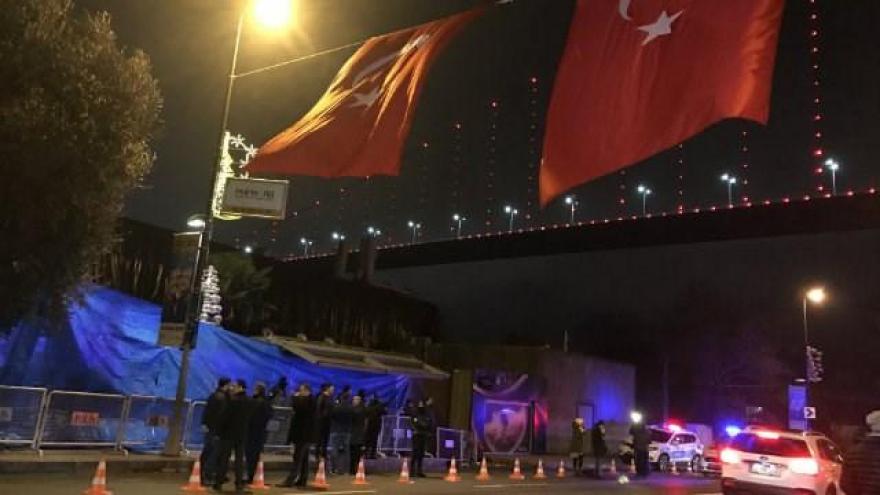 There were no details available on their nationalities. A total of 16 people have been arrested in connection with the investigation, and Turkish authorities are still on the hunt for the gunman who carried out the attack at the Reina nightclub. Dozens more were wounded.

Monday, police released a video that the suspect apparently took of himself in a market near the nightclub. Neither his name nor his nationality have been released.

Laith Alkhouri, a director at Flashpoint, an American business risk intelligence company tracking terrorist and cyber threats, told CNN the "selfie video" featuring the man in Taksim square was first posted on a pro-ISIS Telegram account before being broadcast by Turkish media.

Alkhouri said that suggests the attacker was part of a network supportive of or linked to ISIS, and that he had shared the selfie footage with them before or after the attack.

ISIS claimed responsibility for the attack in a statement posted to Twitter, but the claim cannot be independently verified by CNN. It boasted about the first major terrorist attack of 2017.

"In continuation of the blessed operations which ISIS carries out against Turkey, a soldier of the brave caliphate attacked one of the most popular nightclubs while Christians were celebrating their holiday," the statement read.

'I prayed that it will end soon'

New details emerged about the gunman. Police told Haberturk newspaper the attacker took a taxi from Zeytinburnu, a neighborhood near the Istanbul airport, to a district near the club. Haberturk reported the attacker put his backpack in the trunk of the taxi.

Turkish news agency IHA reported that, according to the taxi driver, the attacker got out of the vehicle in Ortakoy, about four minutes away from the nightclub.

Surveillance video of the gunman showed him first shooting a security guard and police officer at the entrance of the nightclub.

Then, according to an interview with the club's DJ in the Turkish daily Hurriyet, the gunman stood near the DJ booth and started shooting. He changed magazines in the weapon several times and fired more than 100 bullets, Hurriyet said.

"I prayed that it will end soon, then it ended," the DJ told Hurriyet. "He possibly changed his clothes. We heard police 5-10 minutes later."

Deputy Prime Minister Numan Kurtulmus has said the attacker took advantage of the ensuing chaos and slipped out of the club.

According to Haberturk, the shooter got into a cab after the attack but got out a short distance away, in the Kurucesme neighborhood, because he told the cab driver he didn't have any money. The driver told police that the man borrowed his phone and made a call, but details of that call have not been released, Haberturk reported.

Turkish and US officials have called the attack an act of terrorism, and Turkish authorities believe the suspect acted alone.

The militant Kurdistan Worker's Party, or PKK, distanced itself from the attack.

"No Kurdish forces have anything to do with this attack," the PKK said. "The Kurdish freedom fight is also the fight for democratization of Turkey. That's why we won't target innocent and civilian people."

Those killed in the attack were from 14 countries, including India, Morocco, Jordan, Canada, Russia, Tunisia, Saudi Arabia and Kuwait.