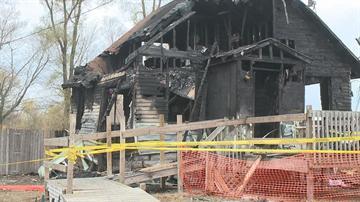 BENTON TOWNSHIP, Mich. – A fire started in a bedroom in the basement of the home on North Euclid Avenue Saturday night.

The six people inside woke up to smoke just after 11:30 p.m., minutes later the house exploded.

“Boom! It sent vibrations through the ground,” Yanesia Phillips said. “People could feel and hear it from a mile away,” but Phillips was just a few feet away when it happened.

Phillips and her husband were there before the explosion,  they went outside when they saw an orange glow through their window. Phillips said the flames were already spewing from the roof, at the sight of the house she yelled,“Somebody do something!”

As her husband went toward the house to help, the second floor collapsed. Phillips said, “Nobody could do nothing, it was too late.”

Two people died, trapped inside the house, four others managed to escape the flames.

59-year-old Norma Hoffman ran out of the home then turned back to get her son who was still stuck inside.

Phillips said Norma screamed “Josh!” over and over again while others shouted at her to stay back, away from the house.

Family members said 28-year-old Josh Hoffman had cerebral palsy, he could only walk on his knees with the assistance of a walker.

Desperate to save her son, Phillips said Norma darted up to the house but just as she got up to the porch, it exploded with a tremendous boom. “The explosion blew her out of the house,” Phillips said.

Witnesses said the blast threw Norma across the street, “When I got to her she wasn’t breathing, burned from head to toe,” said one neighbor.

The 59-year-old was airlifted to a hospital in Kalamazoo, relatives said 90-percent of her body is burned and she was put on life-support.

Josh Hoffman was killed instantly in the blast, “His brother is dead, his mom was severely hurt.” Lisa Hoffman said her husband got word of the explosion Sunday morning; they immediately got in the car and drove to the house.

“I didn’t think he was going to stop, then he did. Maybe he needs to see this,” Lisa said.

Her husband, Gaylon is Norma’s son and was Josh’s brother; he broke down when he saw the house. “I know he can’t talk to anyone about it because he doesn’t know where to start.”

Gaylon sobbed when he saw his brother’s wheelchair inside the charred house, “Look how close he was,” he wailed.

Josh’s room was located on the main floor at the front of the house, not far from the front door.

Lisa said her disabled brother-in-law got out of bed and crawled to the front entrance hall, but the house exploded before he could get out.

“So close to the door, I don’t know why someone couldn’t have run in to get him… I would have,” Lisa said.

Phillips said the house exploded less than four minutes after the fire first started. According to the Benton Township Police Department, there was oxygen in use inside the home.

Neighbors said Cindy Turner had oxygen tanks for a medical condition, 15 tanks had been delivered to the house that afternoon.

Cindy, said to be in her 40’s was also killed in the explosion. She was staying with the Hoffman’s with her daughter, 26-year-old Linda Turner and her son, 7-year-old Eric Turner. The two got out of the house; both were treated for smoke inhalation and were later released.

Norma’s daughter, 36-year-old Melinda “Missy” Ross has also been released from the hospital after being treated for burns and smoke inhalation.

Neighbors said Cindy was a smoker, last month she burned her face while smoking a cigarette with an oxygen mask on her head.

The fire marshal has yet to name the official cause of the fire, an investigation could take several days, but friends, family and neighbors are saying a cigarette started the fire that caused the explosion.

"They was gone, there was no saving them," Phillips said.