Two drownings in Lake Michigan over the weekend 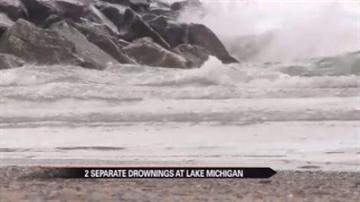 NEW BUFFALO, Mi.-- This weekend two people drowned in Lake Michigan. A beach hazard has been issued until 10am central time on Monday.

Matthew Kocher was pulled from the water yesterday and EMS performed CPR on the scene.

He was taken to a hospital in Michigan City then flown to Comer's Children Hospital in Chicago where he died shortly after.

Kocher was swimming near a buoy and the rock wall when a rip current swept him under water according to the US Coast Guard in Michigan City.

Lucas Zingler said, "Waters on the lake are very dangerous, they can go from being a flat calm day to six foot waves in a matter of minutes. It's going to turn into a bath tub out there and it's a very violent wave unlike the ocean where you have a rolling constant wave. Here the waves comes from every angle."

Zingler said, "The second person that was out in the water off of Beverly Shores, same thing happened. We got ready to launch and the person in the water was recovered and was being treated by EMS on scene."