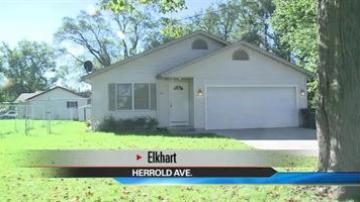 Police say a gunman broke into the West Herrold Avenue home and shot a woman in the foot and pistol whipped the man.

A young child was also in the home at the time.

Elkhart crime scene investigators returned to the house Tuesday to continue the investigation.

So far they have not identified any suspects.

"There was no one there that was identified as suspects and officers searched the area and did not locate anyone there as well. We have not identified anyone yet," said Kris Seymore of the Elkhart Police Department.

Lois Crise, who has lived on Herrold Avenue for the past seven years, says she will now be taking extra precautions to stay safe.

"It sure makes me want to keep more doors looked like I do anyways, and I always as soon as I enter my garage door I will make sure that door goes down immediately as soon as I go in," said Crise.

She also keeps an eye out for the kids that go to Hawthorne Elementary School.

"It is kind of scary for the kids at school because I see a lot of kids walking along here going back and forth. I try to keep an eye out if I am here," said Crise.

Crise says this is not the first time that the street has had a break-in.

"We had a break in right across the street from us, it was in the daytime," said Crise.

The house that was broken into Monday night, had already been broken into once before, according to Crise.

If you have any information on this case, contact Detective Hauser at 389-4719.