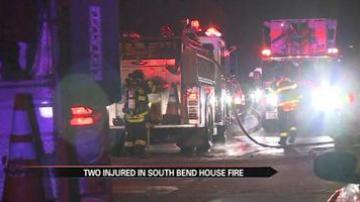 SOUTH BEND, Ind. -- Two people were hospitalized after suffering injuries during a house fire. Calls came in about a fire on the 600 block of Falcon Street in South Bend around 11 p.m. Thursday.

South Bend police officers were nearby at the time and went to respond.

After rescuing a woman from the burning house, an officer became trapped inside.

He was able to escape without any injuries.

Three SBPD officers were taken to the hospital to get checked for smoke inhalation.

Police say the two people hospitalized for injuries were both residents of the burning home.

Fire crews say the flames began in the basement and they were able to contain them to that portion of the home.

Investigators still haven't determined the cause of the fire.