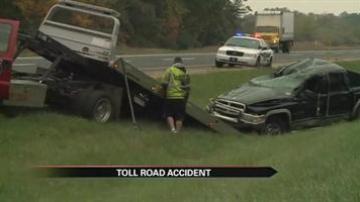 MISHAWAKA, Ind. -- A crash on the Indiana Toll Road just before 2 p.m. Wednesday sent two people to the hospital. There have been 102 accidents on the Toll Road so far this month.

Witnesses called 9-1-1 when they discovered a pickup truck upside down in the middle of the road in the eastbound lanes at mile marker 78.

"Upon arrival we learned that it was a two vehicle accident involving not only a pickup truck but a semi," said Sergeant Jeff Whiteman of the Indiana State Police.

Witnesses told police what they saw.

"We had two witnesses and the semi truck driver stated that the driver of the pickup changed lanes abruptly in front of the semi. The semi did not have time to slow down. Struck the end of the pickup causing the pick up to go in the median and roll over," said Whiteman.

The pickup driver, a 43-year-old Granger man was taken to St. Joseph Regional Medical Center with an arm injury.

The driver of the semi, a 36-year-old Ohio man, suffered mild neck and chest injuries.

Troopers want to stress the importance of drivers being aware of their position on the road at all times and giving themselves enough space to safely pass so accidents like this one can be avoided.