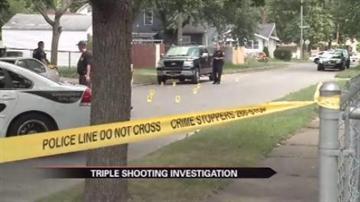 "I thought they were shooting off fireworks and it was just too many. I look down here at the street and I saw the bullets coming out of the gun that's how close they was to us,” said Hawks.

She ran across the street trying to get to her children who were behind a fence playing on a swingset.

"They was over there at the neighbors house where the bullet went through their house,” said Hawks.

"If there had been an adult or a tall kid standing there they would've been shot and killed,” said Tim Corbett, St. Joseph County Metro Homicide.

They believe there's a strong possibility there is a gang connection.

"These guys are 14 or 15 years old, they'll pull a gun out and shoot your goldfish. They do not care,” said Corbett.

South Bend Police say they are aware of the possible gang connection and their street crimes division is working with metro homicide on these shootings.

"The leadership of the street crimes unit is aware of the gang elements,” said Captain Phil Trent of the South Bend Police Department.

Residents who live in the neighborhood with Hawks say they are aware of the gang activity too.

She said talk in the neighborhood is the gang who is responsible is called 211 also now possibly changing their name to hotheads.

The Metro Homicide Unit is not pinpointing one particular gang that could be responsible for the shootings.

They said they need time to complete witness interviews and gather all of the facts.

They said their investigation will hopefully lead them to the person or persons responsible for the deadly shootings.