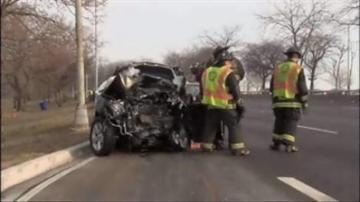 It involved a wrong-way driver on Chicago's Lake Shore Drive.

The two men inside a black Jeep were killed.

Emergency responders used special equipments to remove them from the wreckage.

They are believed to be in their mid 20s.

The other two involved in the crash were taken to local hospitals.

The southbound lanes near the scene of the accident were closed for several hours.