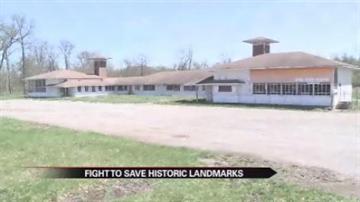 LAPORTE COUNTY, Ind. -- When Indiana Landmarks issued its 10 most endangered properties list, two northern Indiana buildings made the list. The list is released to raise awareness about Hoosier landmarks in danger of being torn down.

Down a gravel road, and far away from any big city, lies the historic Kingsbury Ordnance Plant Office.

First built back in 1940, it was the starting point to a factory that made ammunition.

In its heydey, more than 20,000 people were employed at the factory, helping to secure victories in both World War II and the Korean War.

Now, it's at risk of being lost forever.

"It plays a really key role, not just architecturally, but in our nation's history," Todd Zeiger, Director of Indiana Landmarks - Northern Office, said.

His group is dedicated to preserving the Hoosier state's most cherished places, some of which, have been empty and forgotten about for decades.

"There isn't a bulldozer in the front yard," Zeiger said. "But it's not healthy for a bulding to be empty forever."

The group released its top ten list of most endangered sites in Indiana. Along with the plant in Kingsbury, the Walkerton Presbetyrian Church made the list.

It's so old, moss is growing on the front steps and in between bricks.

"I think it's important to preserve our history so others can see how things were," Fern Schultz, La Porte County Historian, said.

She preserves history every single day, and is one of the few people still living who set foot in the Kingsbury Plant Office.

In fact, she still remembers the day in 1961 when she locked it up for the last time as an employee.

"I find it interesting to see what's happened out there since," Schultz said.

She and others don't know if the list will help these buildings survive another year, but hopes if nothing else, we all take a minute to relfect on our past.