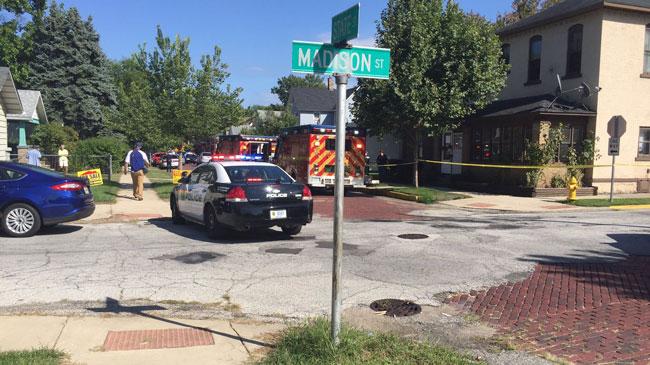 Elkhart Police are investigating a shooting in the 400 block of State Street, near the intersection with Madison.

The shooting happened Tuesday around 3:30 p.m.

Sergeant Chris Snyder said the men were found in a stairwell of a home.

"Both of those victims have gunshot wounds and both are deceased," said Sergeant Snyder.

“I was sitting at home and I heard gunshots, sounded like probably a high caliber handgun. It sounded like 6, 7, possibly 8 shots. At first I wasn’t going to get up and do anything until I heard the sirens. We heard this Jeep come out, it looked they were going chase it and lock it down, the cops just came in from everywhere at that point," said Larry King.

Two men were killed in the shooting.

Elkhart Police held a press conference and said they have not made any arrests.

They do not believe the public is in any danger.

“We are comfortable in saying we don’t believe they're in danger at this time in this area, we don’t feel that anyone else in this area should be concerned for their safety," said Sergeant Snyder.

Identities of the victims will not be released until family is notified.

The coroner says autopsies are scheduled for Wednesday morning in Kalamazoo.