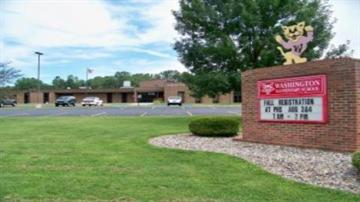 According to the Plymouth Police Department the first meth lab was discovered on March 30th the second on April 1st.

A person mushroom hunting came across the items and called police, the same person found both meth labs.

There is no evidence on the scene to link those responsible.

The school was notified Tuesday and immediately contact parents by phone.

This statement was also posted to the school's website:

Update 04/04/2012
During spring break, the remnants of two meth labs were discovered in the woods behind Washington Elementary.  Thanks go out to the parent who called to let us know about the situation.

At this time, we are roping off the woods area and taking special measures so students do not go into the woods during recess.  We have contacted an environmental management firm to assess the area and advise us on the steps to follow to ensure the area is safe.

Parents of students at Washington Elementary School were notified last night as soon as we knew about the security issues.
Dr. Roger Smith, Assistant Superintendent for Plymouth Community Schools said he was disheartened that the meth labs were discovered so close to the school.
He said that the district is doing all that it can to make sure that the area is safe for kids and the community.
About five acres have been blocked off by administrators. Smith explained that if the meth labs had been found inside a building a safety certificate would be needed by state law to show they properly cleaned up.
But since the meth labs were found outside there are no state laws that require a proper disposal of the items/area. So the school hired a contractor to come in and do an assessment of the area and make sure it is 100% safe before taking down the ropes blocking it off.
Share this article: