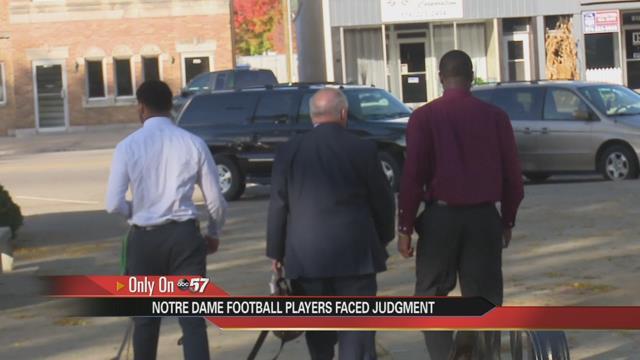 Dexter Williams and Ashton White both pleaded guilty to possession of marijuana.

On August 19, Indiana State Police stopped a vehicle occupied by five members of the Notre Dame Football team for an inoperable taillight and speeding.
When the trooper spoke with the driver, he smelled an odor of marijuana, according to police reports.

During a search of the vehicle, police located a handgun and marijuana, according to the probable cause affidavit.

Because White and Williams do not have any prior offenses, they were released after the hearing on a conditional discharge.

"We're just working through the process and you know these guys are taking responsibility what occurred and were just moving on," said Jeff Stesiak, the attorney who represents both White and Williams.

Their next court hearing will be November 22.