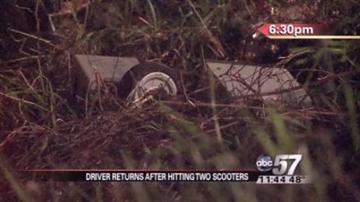 ST JOSEPH COUNTY, Ind--Two people were injured Saturday night after they were hit by a vehicle.

Officers say the victims were on motorized wheel-chairs when they were hit and the drive drove off.

It happened at the Auten and Laurel Roads. Both roads were closed off for a while during the investigation.

The driver was tracked down and told the police he thought he hit a deer in the road.

No word right now about a possible ticket against that driver of how the victims are doing.