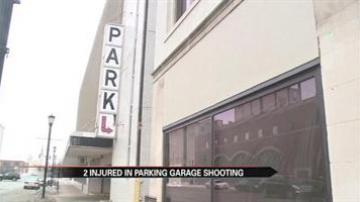 SOUTH BEND, Ind.-- Two men were shot in downtown South Bend early Saturday morning after a massive street fight by Club Fever. Police were working to disperse hundreds of people when they heard gunshots fired from the parking garage around the corner.

Police said two men were shot inside the parking garage on Wayne Street, but their injuries are not life threatening.

Around 2:30 a.m. police said a fight broke out on South Michigan Street after one person was assaulted with a beer bottle inside Club Fever.

According to the police report 29-year-old Demetric Jones was shot in the hand and arm. Police said 28-year-old Victorio Belcher was also shot and went to the hospital.

Police were searching for the shooter on Saturday, and they have not been able to find the gun used in the shooting.

Jennifer Sadural said, “We need to look out for each other and really care, and try to see past ourselves. Shootings are just a symptom of a deeper problem.”

Captain Phil Trent with the South Bend Police Department said they haven't made an arrest because they can't find the gun used in the shooting.

If anyone has information investigators are asking that you call the South Bend Police Department.