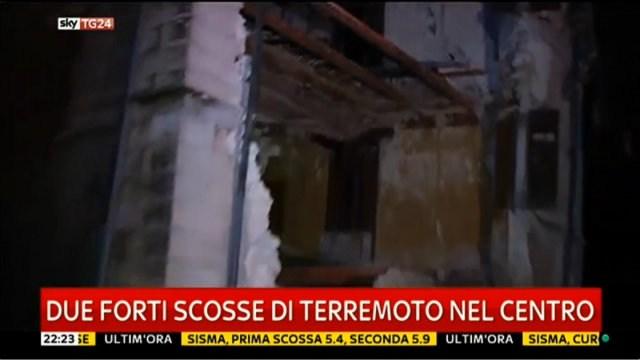 ROME (CNN) -- Two powerful earthquakes Wednesday struck central Italy about 50 miles north of the site of a deadly quake in August that killed nearly 300 people, the US Geological Survey said.

Just a few hours earlier, a magnitude-5.5 quake struck the same region. The epicenter was about 9 kilometers away, south-southwest of Visso. The first quake hit at 7 p.m. (1 p.m. ET) between Perugia and Macerata, according to ANSA.

There have been no reports yet of injuries, although there was damage in at least Visso and another town.

The USGS said both earthquakes were shallow.

Visso is about 110 miles northeast of Rome and 50 miles north of Amatrice, the small town that lost about 270 residents when a magnitude-6.2 quake hit August 24. Another 20 people were killed in nearby towns.

"We don't have any reported victims, but we're in the dark and under a downpour," said Mauro Falcucci, the mayor of the small town of Castelsantangelo sul Nera, according to state news agency ANSA.

"We're waiting for the Civil Protection Department to bring us lighting towers."

Tommaso Della Longa, a spokesman for the Italian branch of the Red Cross, told CNN that after the first shock, many people left their homes and were outside when the second earthquake hit about two hours later.

CNN's Barbie Nadeau was in Rome when the quakes struck. "Incredible aftershock or earthquake felt in Testaccio in Rome. Wow," she said on Twitter.

She said many of the towns in the area are small hamlets that won't be reachable until daylight. People will have to sleep in the cars and it will be a cold night in the mountainous area.

Video recorded by CNN affiliate RAI television showed video of a road to Visso that was largely blocked by a large boulder. Cars were having to carefully drive around it. Several stone buildings in town had been heavily damaged.

Civil protection spokesman Antonio Flippini told CNN that previously damaged buildings had suffered new collapses and that part of the Salaria highway in the Marche region near Amatrice have been closed over concerns of structural damage.

Della Longa said buildings that fell in the area have been unoccupied since the August quake. The area remains off-limits.

Police have offered those living in tent camps the opportunity to stay farther away tonight as the rain falls.