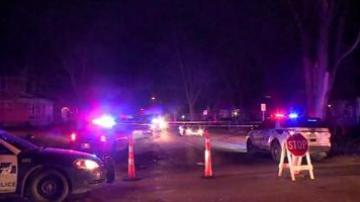 SOUTH BEND, Ind. -- Three people were shot on Johnson Street in South Bend Wednesday night and one of the victims died. The victim killed was identified as 21-year-old Tyrone Kelly.

Detectives are still interviewing witnesses and searching for suspects.

"Somebody died right in front of my house. I got kids in this house so I don't want to be in this neighborhood," said Julius Jones, a Johnson Street resident.

The shooting happened around 8:30 p.m.

"I heard a couple gunshots, well, actually more than a couple, like 5 gunshots. I open the door, look outside and see three guys down the street, right where that black SUV is right there," said Jones.

Jones says he had just put his baby to bed when he heard the gunfire, much too close to home.

"Some guy was lying on the floor, they turned around, pick dude back up, put him in the car, drove down here, the car died right in front of my house," said Jones.

He says he watched as the guys who were not injured jumped out of the car.

Jones says as soon as police and emergency crews arrived, they tried to save the young man who was still in the backseat of the car.

"They was trying to talk to him. I guess he was alive for a brief moment or something, but when he hit that stretcher, his arm just went limp and it just went down. That's when I'm like, that man might be dead," said Jones.

We spoke with the family of one of the two surviving shooting victims. They said one of them is out of the hospital and back at home.