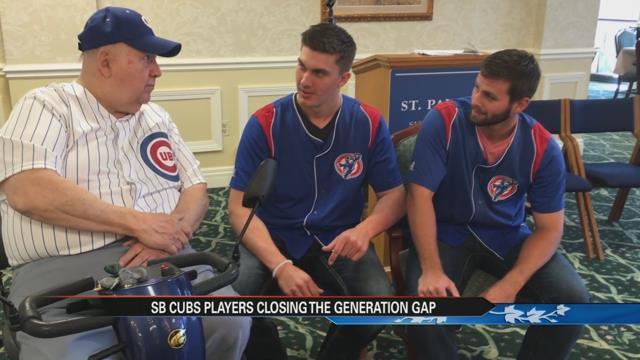 South Bend Cubs and Saint Joseph Health System have teamed up to bring free housing to two of the newest Cubs players.

It’s all about bringing together different generations to learn from one another.

“This is a new program for us,” said South Bend Cubs President Joe Hart.  “This is the first time and it’s hopefully something that we can expand on upon going forward.  We have two young guys named Carson and Craig that are excited about living over here and sharing their stories and also getting to know the folks here at St Paul’s.”

Sands is from Tallahassee, Florida and will be a pitcher for the South Bend Cubs.

“I thought it was a good opportunity, something that Craig and I couldn’t pass up,” Sands said.  “You know it’s something that might not ever happen again.  It’s good to have this especially when your family is 13 hours away.  You get someone to hang out with, talk to, and people to meet so it’s nice having them around.”

Brooks is from Monroe, North Carolina and will be a pitcher for the South Bend Cubs as well.

“We’ve already met like 25, 30 people already and just hearing their stories and them wanting to hear ours is definitely more than what we can do for them,” said Brooks.  “We just appreciate meeting everybody.”

St. Paul’s resident Russell Andrews has been a Chicago Cubs fan since he was nine years old.  He carries around his Die-Hard Cubs Fans card in his wallet that he got back in 1940.

“Oh I was thrilled when I heard that,” Andrews said.  “You know the Diamondbacks were here, and then the White Sox were here for a while and now I heard the Cubs are taking it and I really got excited.”

Andrews will be throwing the ceremonial first pitch for the game against Bowling Green on April 13th.

“I think it was a great honor to be asked to do that,” said Andrews.  “I’m going to really enjoy it.”