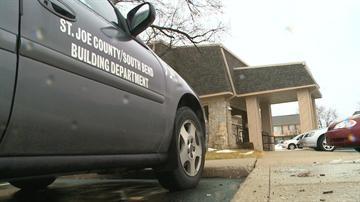 SOUTH BEND, Ind. – Residents of Park Jefferson apartments are still wondering about the safety of their homes after a meeting between South Bend officials and managers at the complex on Tuesday.

Two-weeks after a fire tore through one of the buildings and destroyed 33 homes at the complex on Jefferson Boulevard, the burned out hulks of the apartments still remain and so do doubts about the safety of the complex.

"What's next, I mean it's the second fire in the few months I've been here," said Karla Estrada, a resident at Park Jefferson.

"We had a productive meeting at Park Jefferson and the City will be available to help the complex with safety recommendations,” stated Mike Schmuhl, Chief of Staff for Mayor Pete Buttigieg.  “We both have a common goal, which is the safety of all City of South Bend residents."

The people who live at Park Jefferson had been anticipating that at least some of their questions about the cause of the fire and the safety of the buildings would have been answered after the meeting.

"I have three kids and it really concerns me, if these apartments aren't safe then I think it would be better off that we move," explained Karla Estrada.  "I'm pretty sure all parents think the same way I do, it's really scary and it's even more scary that they don't give us results of what's causing it or if the apartment's are safe or not.”

Damian Maciniak, who lives in the building that caught fire and whose apartment was one of the few left undamaged, agreed with Estrada that people deserve answers.