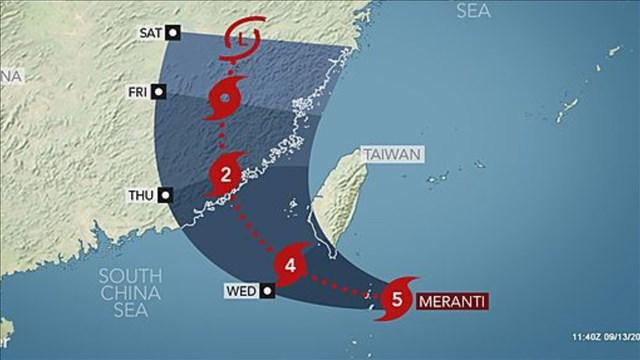 The powerful storm first raked southern Taiwan, bringing winds of up to 230 mph (370 kilometers per hour) -- faster than a Formula One race car -- at one point and torrential rains.

Meranti is the strongest typhoon since Super Typhoon Haiyan devastated the Philippines in 2013.

As the sun came out Thursday morning, residents and journalists were assessing the damage.

Correspondent Matt Rivers, who is in Xiamen, said several buildings across from where a CNN crew was staying had lost most of their windows when the fierce winds rolled in.

It is a holiday in China and many people were home or traveling to see family.

Winds were still blowing harshly in Xiamen and other coastal cities.

Meranti's strength prompted China to issue its highest warning for high ocean waves as emergency crews and officials prepared for the deluge.

"The typhoon will bring gales and heavy rains when it makes landfall," meteorologist Li Mei said, according to state-run Xinhua news agency.

Typhoon Meranti will weaken quickly as it moves inland. Heavy rainfall and flash flooding, as well as dangerous winds, will continue for the next 48 hours. Mudslides will be possible in eastern China.

No longer super but still dangerous

Meranti had been classified as a super typhoon, but the storm -- though still dangerous -- has weakened to typhoon status, the Joint Typhoon Warning Center said late Wednesday.

It's now the equivalent of a Category 4 hurricane on the Saffir-Simpson Hurricane Wind Scale.

The main threats to land include large storm surges and coastal inundation, inland flash flooding, mudslides and damaging winds in excess of 90 mph (150 kilometers per hour).

Closings and cancellations in southern Taiwan

Schools and offices across the south of Taiwan closed, and flights were canceled, according to news reports.

More than 370 domestic and international flights were canceled, train services were suspended and roads were closed.

As of 7 a.m. local time Wednesday, around 1,500 people had been evacuated from the affected areas, Li Wei-sen of the Taiwan Central Emergency Operating Center told CNN.

Almost 4,000 military and police personnel were deployed to prepare for potential future evacuations, but he said authorities are not expecting major damage or destruction.

In West Dawu, rainfall totaled 707 millimeters or nearly 28 inches, and flood warnings are in place for 16 rivers, the news agency said.

But the main brunt of the storm will fall on China.

Authorities in six southeastern provinces as well as Shanghai initiated emergency response measures, according to Xinhua.

It took only 24 hours for the storm to go from a minimal typhoon (winds of 80 mph) to a super typhoon with winds in excess of 150 mph, CNN meteorologists said.

"Gales and waves up to 12 meters high have been observed off the eastern coast of Taiwan, as the 14th typhoon this year moves westward and is expected to hit the coast of Fujian, Zhejiang and Guangdong provinces on Wednesday and Thursday," Xinhua reported.

Surges are expected off those three provinces, officials said.

The State Oceanic Administration trigged "a class-II emergency response, the second highest level," ships have been ordered back to harbor and people have been told not to venture outside, according to the news agency.

Despite being a frequent target for powerful Pacific typhoons, Taiwan has a track record of limiting their deadly impact. But storms often turn deadlier as they move to the mainland. The flatter terrain -- prone to storm surges and inland flooding -- and higher population density often result in a great number of deaths or displacement of people.

In July, Super Typhoon Nepartak hit in almost the same location as where Meranti is traveling. Nepartak caused at least three deaths in Taiwan and cut power to more than 500,000 but became much deadlier as it moved to the mainland.

Despite weakening to a tropical storm, Nepartak and its associated heavy rainfall of up to 10 inches killed more than 80 people. Meranti is a much stronger storm than Nepartak was, meteorologists said.