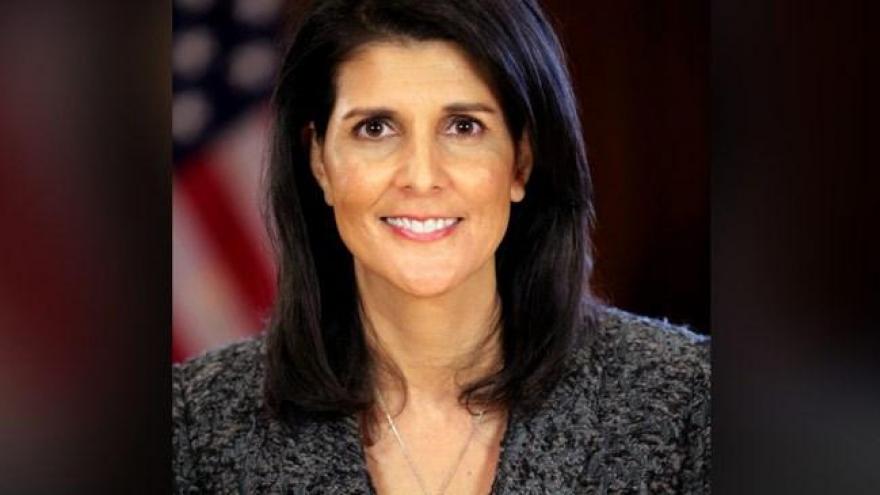 (CNN) -- The US Ambassador to the United Nations offered a strong condemnation of Russia in her first appearance at the UN Security Council on Thursday, calling on Moscow to de-escalate violence in eastern Ukraine and saying that US sanctions against Moscow will remain in place until it withdraws from Crimea.

"The United States continues to condemn and call for an immediate end to the Russian occupation of Crimea," said Nikki Haley, President Donald Trump's envoy to the world body. "Crimea is a part of Ukraine. Our Crimea-related sanctions will remain in place until Russia returns control over the peninsula to Ukraine."

Haley's remarks were notable for the stark difference between her rhetoric and Trump's.

On the campaign trail, the President hinted he might recognize Russia's annexation of Crimea. And at a news conference with British Prime Minister Theresa May last week, he said it was "too early" to discuss sanctions.

Haley was speaking at an emergency UN meeting about a sudden upsurge in violence in eastern Ukraine, where Russian-backed separatists have been fighting the Ukrainian army forces.

"I consider it unfortunate that the occasion of my first appearance here is one in which I must condemn the aggressive actions of Russia," Haley said. "We do want to better our relations with Russia. However, the dire situation in eastern Ukraine is one that demands clear and strong condemnation of Russian actions."

"The sudden increase in fighting in eastern Ukraine has trapped thousands of civilians and destroyed vital infrastructure and the crisis is spreading, endangering many thousands more," Haley added. "This escalation of violence must stop."