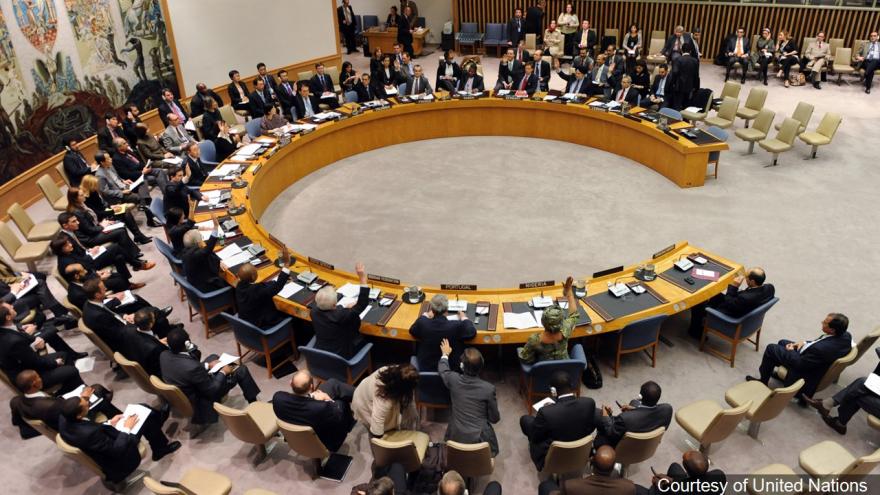 With 15 votes in favor, Resolution 2371 was passed unanimously.

The sanctions will slash North Korea's annual export revenue of $3 billion by more than a third, according to a statement from the office of Nikki Haley, the US ambassador to the United Nations.

The resolution represents "the strongest sanctions ever imposed in response to a ballistic missile test," the statement said.

The UN sanctions follow extra measures against North Korea signed into law by US President Donald Trump on Wednesday.

North Korea's state-run newspaper Rodong Sinmun carried an article Sunday warning that the United States' only option will be self-destruction unless it gives up its "hostile policy" against Pyongyang.

"The US mainland will sink into an unimaginable sea of fire on the day when it dares to touch our country by stupidly causing mischief and brandishing its nuclear and sanctions clubs," the commentary -- under the byline Ri Hyo Jin -- warned.

'Up to North Korea'

Trump has been critical of UN performance in the past but was glad to see China and Russia join with the United States to condemn and crack down on the moneymaking ventures that fuel North Korea's outlawed missile expansion program.

As for what's next, Haley said, it's "completely up to North Korea."

Two recent ICBM launches by North Korea prompted a call for action by many UN members, and Haley said the resolution includes "one of the strongest sanctions that's have been passed in a generation."

The Security Council measured the impact in a big round number: $1 billion in key exports from North Korea to be banned under new international law. From seafood to coal, the resolution demands a shutoff of some of the ways that the reclusive regime makes valuable hard currency to fuel its rising ballistic missile and nuclear industry.

British Ambassador Matthew Rycroft said North Korea, by its ICBM launches, is showing contempt and disregard for the Security Council. "We must meet this belligerence with unequivocal condemnation and with clear, unequivocal consequences," he said.

The resolution also bans countries from hiring additional North Korean workers, a move designed to shut off another source of hard currency for the Pyongyang regime. A Security Council diplomat said the workers are kept in deplorable conditions in many countries. Haley termed it "modern slavery."

The resolution also placed nine people and four business entities -- including a major North Korean bank -- on a UN blacklist, slapping all with asset freezes or travel bans.

Adding tougher sanctions was not possible, with China opposing more severe restrictions that might have been urged by Washington. North Korea is still allowed to receive oil.

Differences between China and US

China and a few other countries would like to see dialogue between North Korea and the United States.

"We are happy to talk with them, but they have to stop this reckless action in order for us to do that," Haley said.

The resolution, like many before, was worked out over several weeks of negotiations between the United States and China. Ambassador Haley thanked China at the Security Council table for its cooperation.

However large differences remain between the US and China, North Korea's main ally.

Chinese Ambassador Liu Jieyi did condemn the ICBM launches but warned against the deployment of the Terminal High Altitude Area Defense (THAAD) anti-missile system in South Korea by the United States. Jieyi said the missile deployment will not bring a solution to the nuclear and missile testing by North Korea.

Haley said the US "is taking and will continue to take prudent defensive measures to protect ourselves and our allies" from the threat posed by North Korea.

Jieyi of China countered that "China strongly urges parties concerned to halt the process of this deployment and dismantle relevant equipment."

Russia called the THAAD system an irritant that threatens the regions security.

The US secretary of state is currently meeting with Asian regional ministers, with North Korea a leading topic.

At that meeting, Chinese Foreign Minister Wang Yi spoke to reporters Sunday and said while sanctions are necessary, "sanctions are by no means the ultimate goal.

Experts on North Korea have warned that the impact of sanctions could be limited.

Seung-Kyun Ko, a professor at Hawaii Pacific University and a former research commissioner in South Korea's Ministry of Foreign Affairs, told CNN last week that the Kim regime will not respond to punitive measures.

"If there are no negotiations, the current tensions will continue. North Korea will endeavor to improve its nuclear and missile capability," Ko said.

"North Korea is an absolute dictatorial regime ... It has sacrificed so much and so many. It is willing to sacrifice more," Ko said.

John Delury of Yonsei University said the US and Security Council measures appeared to be aimed at North Korea's economy as a whole and it was unlikely the UN resolution would force Pyongyang to abandon its nuclear program.

"When the economy overall hurts they don't cut the military first, they cut it last. They are very used to suffering economically and the regime is very good at it," Delury said.

Andrei Lankov, a North Korea expert from Kookmin University in Seoul, had a similar take when talking about sanctions the US imposed unilaterally last week.

"If we are talking about denuclearization, let's be frank -- nothing is going to work. (The) North Korean government is determined to remain nuclear, and it will remain nuclear. Period. If it means massive economic disaster, they will not care," he told CNN.