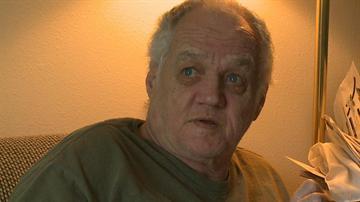 ELKHART, Ind. – An armed home invader got a shock when Tom Good, 70, decided he was going to stand up to the would-be crook.

Good, who lives alone, was sitting in his bedroom around 9:30 p.m. on Sunday when he looked up to see a man in a mask and holding a pistol standing in his living room.  Apparently Good had forgotten to lock his patio door after letting his cat out.

"When I seen him I said, what do you want?” Good described.  “He said don't say a word or I'll shoot you had the gun pointed right at me."

The retired railroad worker and army veteran said he was afraid, but wasn’t going to sit and watch someone steal from him.

"Yeah I was scared, but the Good Lord put me on this planet to do something,” Good explained.  “This is my home and I'm here to protect what I got in it and who's in it."

With the man still pointing a gun at him, Good stood-up and walked towards him. The man slammed Good’s bedroom door shut and held it closed.

“I told him to open this door and face a man,” he described.  “Don't think he expected a 70-year-old man to get up and do something like that."

Good pushed against the door and eventually forced it open, the intruder ran back out the patio door to another man, who Good guessed was a look-out.

"I looked out and he tried to get back in and I locked the door,” Good described.  “They didn't get it, they didn't take anything."

The pair of would-be thieves ran off before Elkhart Police arrived.  Good described that investigators found fingerprints on his door, which he said he’ll never forget to lock again.

"They picked on the wrong person to mess with this time," Good said.

Because it was dark and both when were wearing masks and bulky hooded sweatshirts he said he couldn’t give a good description of the men.

No word on whether Elkhart Police have any suspects in the case.