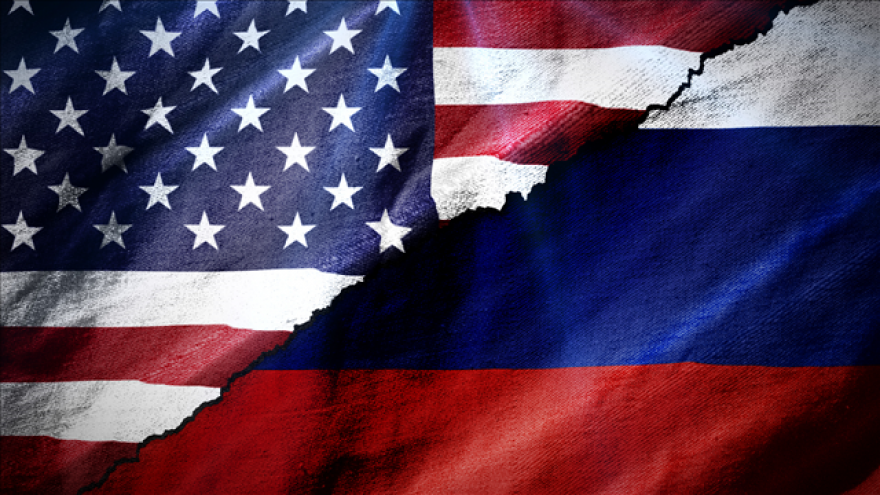 (CNN) -- An unarmed Russian Air Force aircraft overflew the US Capitol, the Pentagon, Central Intelligence Agency and Andrews Air Force Base at low altitude on Wednesday as part of a longstanding treaty that allows the militaries of the United States and Russia to observe the other from the air, according to two people familiar with the flight.

The flight was part of the Treaty on Open Skies, which allows military aircraft from the United States and Russia and other nations to fly aerial observation flights to observe military sites of the 34 signatory nations.

The Russian Air Force Tupolev Tu-154 on Wednesday afternoon passed at around 3,700 feet over downtown Washington and Andrews Air Force Base in Maryland, where Air Force One is based, according to tracking website Flightradar24.

The jet is authorized to enter P-56, the highly secure airspace surrounding the White House.

A second flight by the same jet is planned for between 5 p.m. and 6 p.m. Wednesday, when the Russian jet will overfly Bedminster, New Jersey, where President Donald Trump is vacationing, according to two people familiar with the US government-approved flight.

A law enforcement source told CNN that the plane also overflew Camp David, the presidential retreat in the Catoctin Mountains, the Trump National Golf Course in Virginia, and Mount Weather, one of the US government's secret relocation bunkers.

United States Air Force personnel were on the flight and the aircraft is capable of a variety of intelligence gathering, one of the people said.

The Open Skies Treaty has been in effect since 2002 and over 1,200 flights have been conducted since, which contributes to verification of compliance with arms control agreements, according to the US Defense Threat Reduction Agency.

Dan Gaffney, spokesman for the DTRA, declined to confirm the surveilled targets. The agency can only confirm specific locations once a mission is over.

"The treaty is designed to enhance mutual understanding and confidence by giving all participants, regardless of size, a direct role in gathering information through aerial imaging on military forces and activities of concern to them," according to the State Department.

Law enforcement agencies were given very little warning of these "short notice" flights, which are authorized by the treaty. The Russian aircraft has the ability to perform a variety of intelligence gathering functions, including aerial photography, thermal imaging, and picking up signals intelligence.

According to the DTRA, Open Skies flights receive air traffic control priority and are closely coordinated with the Federal Aviation Administration.

The treaty flights are fairly common and the same Russian Air Force jet was spotted recently landing at McConnell Air Force Base in Wichita, Kansas. The flight Wednesday is notable because of the high-profile nature of its surveillance targets in the nation's capital.

The US Capitol Police sent an alert regarding plans of an aircraft to overfly Washington between 11 a.m. and 3 p.m. on Wednesday.

"The aircraft will be large and may fly directly over the US Capitol," according to the alert. "This flight will be monitored by the US Capitol Police Command Center and other federal government agencies."

The statement did not mention that the aircraft would be flown by the Russian Air Force.

The Russian Embassy in the United States did not immediately respond to a request for comment.