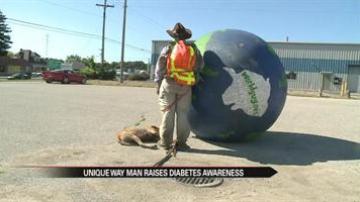 SOUTH BEND, Ind. -- The American Diabetes Association says there are just under 30 million Americans diagnosed with diabetes. One man is very passionate about raising awareness but he does it in a unique way.

He goes by "The World Guy" but his real name is Erik Bendl.

He's from Louisville, Kentucky and spends most of his days carrying around a giant globe and his dog named Nice.

Together, they walk to different to cities across the country talking to people about diabetes.

Bendl lost his mom to diabetes.

"I can talk about it now without crying," said Bendl.

He uses his grief to spread a message around the globe.

He says he stopped counting the miles after he hit 6,000 two years ago.

He literally carries the whole world in his hands and walks for those with diabetes.

To them, he's an inspiration.

"I met a guy with diabetes who told me after he met me, he lost 200 pounds and his pump," said Bendl.

But it's his humility that everyone around the world can relate to.

“I'd rather have an effect on somebody than build a big mansion," said Bendl.

You can track his latest whereabouts here.