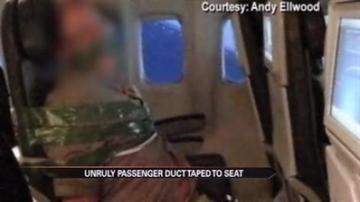 One man tried to mix air travel with alcohol and it resulted in humiliation.

A man on an Iceland air flight went on a rampage.

Passengers said he was screaming and even hitting and spitting on other passengers.

Fed up, the other passengers took matters into their own hands and duct taped him to his seat.

He was later taken by police to an area hospital where he was treated for alcohol poisoning.

At this hour he has not been charged.