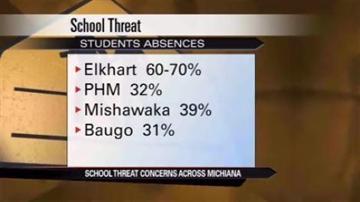 ELKHART, Ind. -- Schools in Elkhart and St. Joseph County are on high alert this week following a threat made in January that claimed 20 students in five schools would be killed on April 15. Many parents kept their students home Monday.

“In general, the message has been we are putting in place measures to make our schools safe," said Doug Thorne of Elkhart Community Schools.

Despite the police presence and heightened security measures, attendance across the area took a significant hit.

Elkhart Community Schools reported 60 to 70 percent of their student body was absent Monday.

In the Penn Harris Madison district, 32 percent of their student body stayed home, including more than 1200 just from the high school.

Baugo Community Schools reported about 31 percent of their students absent.

We have seen a higher level of absenteeism today which varies from school to school. It is unfortunate that for many students, their educational pursuits were disrupted based on a written threat that created fear and alarm.

Law enforcement will be patrolling local public and private schools throughout the week.