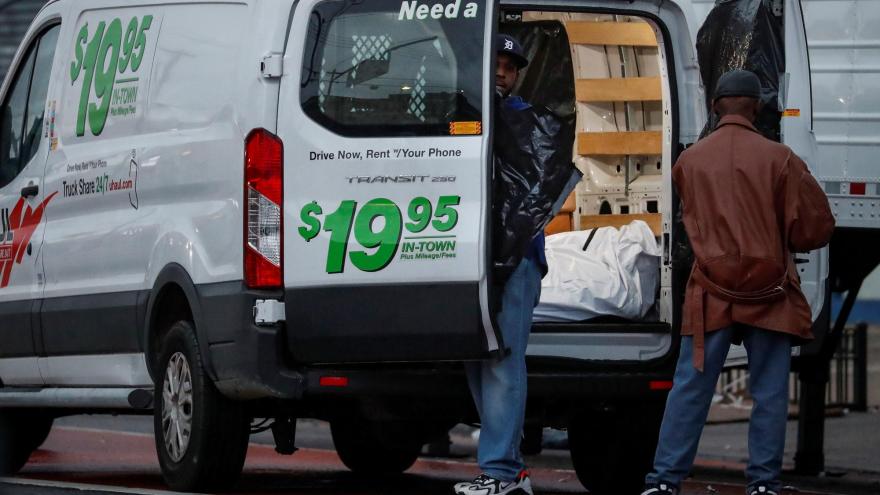 Workers secure a van full of bodies of deceased people, during the outbreak of coronavirus disease at the Andrew Cleckley Funeral Home in the Brooklyn borough of New York City, New York, U.S., April 29, 2020.

(CNN) -- Officials were back at a Brooklyn funeral home Thursday, removing bodies that weren't properly cared for inside the home, a law enforcement official tells CNN.

A day earlier, officials discovered four trucks containing as many as 60 bodies outside the Andrew Cleckley Funeral Home after someone reported fluids dripping from the trucks, according to the law enforcement official.

It's unclear how many bodies will be removed, the official said Thursday.

Authorities have also asked the owner to gather paperwork that would help identify the bodies.

The Department of Environmental Protection issued two summonses to the owner of the funeral home for a foul odor.

CNN reached out to the home Thursday for comment. Wednesday, someone who identified himself as the owner would not comment.

The funeral home was overwhelmed and ran out of room for bodies, which were awaiting cremation, and used the trucks for storage, a second law enforcement source said Wednesday.

At least one of the trucks was unrefrigerated, according to one law enforcement official. One source said the bodies were put on ice.

"They were like almost everyone doing their best to cope," one source said.

New York has been the epicenter of the US coronavirus outbreak for weeks, with 17,866 confirmed and probable Covid-19 deaths, according to the city website.

New York has freezer trucks that funeral homes can use if they are overwhelmed, and the city sent one to hold the bodies, CNN affiliate WABC reported.

"Funeral directors are required to store decedents awaiting burial or other final disposition in appropriate conditions and to follow their routine infection prevention and control precautions," the New York State Health Department said in a statement regarding the incident.