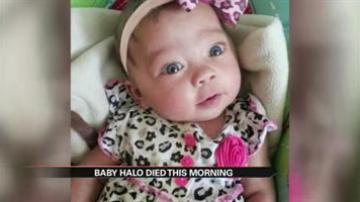 SOUTH BEND, Ind.-- 4-month-old Halo Stutzman died at Memorial Hospital on Saturday after being in critical condition since Thursday.

The infant's father, 22-year-old Bryan Michel, is charged with neglect of a dependent resulting in death.

On Thursday Police responded to a 911 call in the 1400 block of Dubail Street and found the infant not breathing.

According to the court affidavit released on Saturday, paramedics performed CPR, revived Halo and rushed her to Memorial Hospital.

The court documents also state that Michel changed his story with police.

In one interview Michel told police that he dropped his 4-month-old daughter when he was trying to give her a bath and then fell on her.

According to medical personnel, her death was caused by lack of oxygen to the brain.