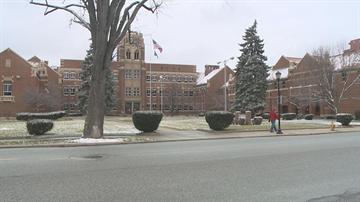 ST. JOSEPH COUNTY, Ind. -- We have an update for you in the alleged sexual assault at Mishawaka High School.

The Delinquency Petitions allege Attempted Criminal Deviate Conduct, which would be a Class B Felony if committed by an adult.

They are accused of sodomizing a fellow classmate.

The six individuals were all under the age of 18 at the time of the alleged incident.

The Prosecutor's Office said this includes the teen who was taken into custody on Dec. 16, and five additional minors.

Prosecutors also said that at the time the incident allegedly took place, the six minors included one 17-year-old, two 16-year-olds and three 15-year-olds.

Prosecutors said that the minor who was taken into custody on Dec. 16 was released on Friday, and is under electronic monitoring. He has a 'fact finding hearing date' on Feb. 14, 2012. Prosecutors said this is similar to a trial in adult court.

The five other minors facing charges have not been taken into custody. They have a hearing date of Jan. 9, 2012.

Relatives close to the situation told ABC57 that is all started over some stolen money.

At this time, names are not being released as all parties involved are minors. The Prosecutor's Office said that copies of the charges are not available, and it will be at the discretion of the Probate Court Judge whether or not they will be made public.

ABC 57 News will continue to follow this story and bring you the latest information as it becomes available.