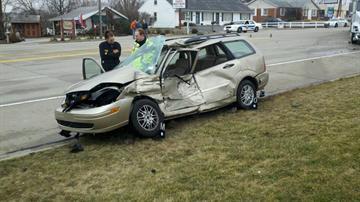 SOUTH BEND, Ind. -- A semi versus car crash proved to be fatal for one elderly woman on Thursday.

The crash happened at the intersection of Hildebrand Road and US 31 around 11 a.m.

The road was completely shut down in both directions.

We had a crew at the scene. ABC 57's Jillian Mahen was able to speak to one officer. South Bend Police Officer Ian McQueen said that a 99-year-old woman was driving car involved in the crash.

He said she was at a business and pulled out onto 31 in front of the semi.

The truck driver could not stop and slammed into her car.

She was taken to Memorial Hospital where she was pronounced dead.

Police will not release the name of the woman until after her family is notified.