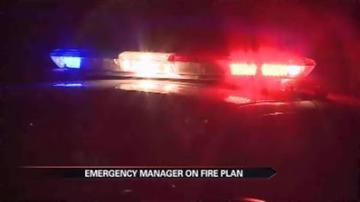 BENTON HARBOR, Mich. -- In order to cut costs, fire fighters and police officers in Benton Harbor are cross trained.  Rather than having separate departments, the two merged to make the public safety department.  But many Benton Harbor City residents say that they do not feel safe with the lines being blurred.

"What if a fight and a fire breaks out, or a robbery and a fire, then we are just lost."  said Benton Harbor resident, Champagne McKinney.  She worries that there are not enough police or fire fighters in the area.

But the emergency financial manager, Tony Saunders says he strongly believes in the merge; it's been proven to be effective in several cities.

"This is a model that is gaining a lot of steam in Michigan.  What we want to do is make sure that we are putting in enough resources to take our public safety to the next level." Saunders explained.

He says that the best way to keep people who protect Benton Harbor and the city residents safe is to make sure that officers are continuously being trained.

"What are stepping up training not just in public safety but in every department."