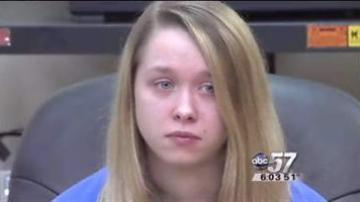 SAINT JOSEPH, Mich. - A judge found a 17-year-old girl, accused of shooting her boyfriend in the face, mentally unstable.

Judge Thomas Nelson of the Berrien County’s Juvenile Court ruled Destiny Coulson mentally unable to assist her attorneys in the case. Consequentially, the decision to try Coulson as an adult was put off.

In January police said Coulson shot and killed her boyfriend, 21-year-old D.J. Quinn with a shotgun after a fight.

For nearly two hours Coulson showed no emotion in the courtroom, looking down, while witnesses testified about her mental status.

Her lawyer, Lanny Fisher, brought in a psychologist that testified Coulson has a form of Schizophrenia that causes hallucinations.

Psychologist Jeff Kielszewski said, based on examination, Coulson sees and hears hallucinations. Keilszewski said the extra stress of a trial could trigger them making her useless to her lawyer.

"The stress of a court case in these proceedings, in her case, may exacerbate these hallucinations that you found her experiencing (and)  would impede her ability to assist?” asked Nelson. “Yes," replied Kielszewski.

Pierangiali called Coulson’s juvenile detention teacher, John Picar, to the stand. Picar testified that Coulson was able to talk about the case in discussions he has had with her.

"Has there ever been any indication to you that, based on your experiences has she had hallucinations or heard voices?” asked Pierangiali. "No,” replied Picar. “Not from what I’ve seen."

Ultimately Nelson erred on the side of caution. "I do find Destiny Coulson to be incompetent to assist in her defense,” he said. The ruling delays the decision to Coulson for 2nd-degree homicide in adult court.

Kielszewki said with medication and psychotherapy Coulson should be able to handle the trial at some point.

Another court date is set for May 16. Coulson’s mental status will be reevaluated.