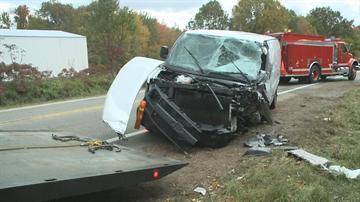 EDWARDSBURG, Mich. – A driver who may have fallen asleep at the wheel caused a four-car accident around 10 a.m. Wednesday morning on US-12 near Edwardsburg.

According to Chief Ken Wray with the Edwardsburg-Ontwa Township Police Department, just before 10:15 a.m. the driver of a westbound delivery van, 23-year-old Robert Rudolf of South Bend, swerved over the centerline and struck an oncoming semi head-on. “The driver told somebody that he’d fallen asleep,” said Wray.

After impacting the first semi, the van bounced off and sideswiped another eastbound semi. A wheel that came off the van struck a fourth vehicle that was travelling westbound.

Rudolf and one of the semi drivers were extricated from their vehicles. Rudolf was flown to Memorial Hospital in South Bend for his injuries.

“I saw debris everywhere and it almost happened like it was in slow-motion,” said Shelley Fry, a witness to the accident. “I’ve seen my fair share of accidents and usually the person in the smaller vehicle isn’t as lucky to be able to come out of it alive.”

According to Wray, Rudolph was treated for only a broken arm and other minor injuries. The semi driver that was taken to the hospital suffered bruised ribs. Nobody else involved was injured.