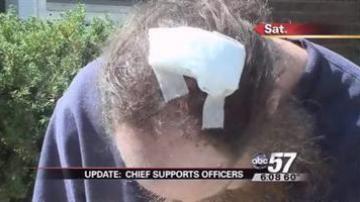 NILES, Mich. -- The Niles Police Chief said he stands behind his officers accused of police brutality.

It is an update to a story we first broke on Saturday night.

Neighbors said cops tasered and beat William Parker with a flashlight all because he wanted to ride with his mother in an ambulance.

On Tuesday, we talked with Parker's brother-in-law. He told us he made a citizen's complaint with the chief and that Parker is meeting with a lawyer on Wednesday.