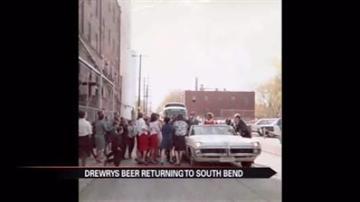 SOUTH BEND, Ind. --A beer that was a staple at dinner tables across Michiana is making a comeback.  New owners of the Drewrys brewing company are just months away from relaunching the beer.

It  used to be that if you were anywhere near Portage and Elwood you could smell the hops brewing, but that was decades ago.  Back then, even Bobby Kennedy waited in line for a Drewrys!

New owners of Drewrys say it won’t be long before the South Bend favorite is back. As far as the recipe goes they say they are sticking  to the basics.  They’ve even got their hands on the same types of hops that were used back in the day.

"Its more than just beer, Drewrys beer represents so much  to South Bend and the Michiana community beyond just something tasty to drink, it’s a memory its part of history ." said Drewrys spokesperson, Dan Blacharski.

The company signed with an Indiana distributor.  In just a few months the beer will be served in restaurants and bars right here in Michiana.

Since announcing their comeback on Facebook, Drewrys has received all kinds of pictures and stories about the beer’s history.   So they are putting together a coffee table book, "Drewrys Extra Dry: A look back at all the fun".

The plan is for this book of memoires to be sold this summer with the old brew with a new twist makes its way back into Michiana.