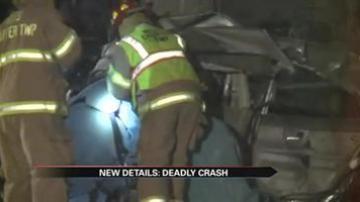 CASS COUNTY, Mich. -- The Cass County Sheriff's Department revealed the identity of the person driving when a 12-year-old was killed early Tuesday morning in an accident on Bertrand Street in Milton Township.

The driver was identified as 14-year-old Brandon Zachary Burr of Niles, Michigan.

The passenger who was killed was identified as 12-year-old Adrian Matthew Chiquito of Niles.

Deputies say Burr lost control of the vehicle and struck a tree.

Burr's mother Mary said he sustained a brain injury in the crash.

Burr is an eighth grader at Brandywine High and Middle School in Niles.

Mary said she knew why her son was behind the wheel but did not want to talk about it until sh learned more about what led up to the crash.