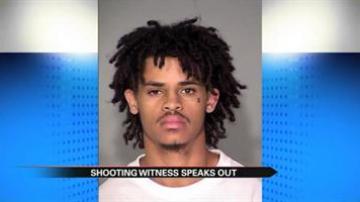 SOUTH BEND, Ind.-- Indianapolis Police arrested Deloren Wilson on Saturday. He was wanted in South Bend for a double shooting on Fairview Avenue.

Police said Wilson was the main suspect in the July 14th home invasion.

Police said 24-year-old Turquoise Buggs was in critical condition but he was upgraded to stable on Friday after an emergency surgery.

South Bend Police said the second victim, 22-year-old Aaron Smith, was shot in the shoulder and he is expected to be okay.

William Johnson was on his way to meet his friends at their home in the 400 block of Fairview Avenue when he showed up to find police searching the neighborhood.

Johnson said, “Aaron Smith was shot in his arm and I think it went out through his mouth, but he got shot three or four times and Turquoise Buggs got shot through the stomach one time but his condition was a lot worse.”

After a short pursuit, Wilson was apprehended and police found a gun on him.

Johnson said he believes the intruder wanted to steal a moped, and that's when Smith tried to tackle him to the ground.

“The guy kept saying, 'Give me the keys, give me the keys.' And he had the gun to his head so his siblings heard it, so that’s when Aaron rushed in there and slammed the guy and he didn’t drop the gun so he started shooting," said Johnson.