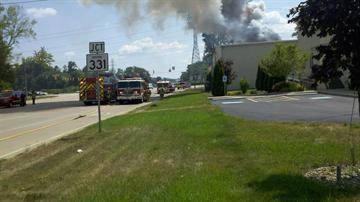 MISHAWAKA, Ind. -- Firefighters now have an industrial fire under control at a Mishawaka plant.

Multiple fire departments were on the scene. Firefighters had a difficult time fighting the fire because it involved chemicals.

We were just told by our reporter that Osceola Fire Department also responded to help extinguish the flames. A special foam truck was needed to help put out the fire.

The police chief said the fire may be out, but chemicals are still leaking. Emergency crews will be at the scene for a few more hours working on chemical clean-up. A HazMat team from South Bend and a wastewater team from Mishawaka are working on a plan for leaking chemicals. The chemicals involved in the fire include acetone and oils.

The fire ignited inside a business just after noon at the busy intersection of Capital Avenue and McKinley Highway in Mishawaka.

Police closed traffic in both directions on McKinley Highway from Elder Rd. to East Ave.

ABC 57 News was the first local news station at the scene. Firefighters pushed our reporters back from the area, saying materials inside the building could explode.

We watched as firefighters worked to get the situation under control. We were there as one worker busted in a door to get inside and put out the fire.

ABC 57's Jillian Mahen also spoke to a representative of Lebermuth Company. They said they will give us more information as soon as they know more about what happened. The company makes fragrances and essential oils.