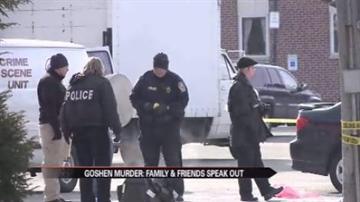 GOSHEN, Ind. – Family and friends are in shock that a former Goshen cop would murder his ex-girlfriend and then kill himself.

“I just had a friend call me and tell me that Eric had killed himself, which kind of took me by surprise,” said friend Shaun Edgerton.

Edgerton says he was in disbelief when he found out that his life-long friend, 51-year-old John Eric Haitsma had shot and killed his ex-girlfriend, 48-year-old Millicent Morros and then killed himself.

“From what I know that would be totally out of character for him,” said Edgerton.

Edgerton says he knows Haitsma as a quiet guy who would do anything for his daughter.

“Very nice guy, quiet, reserved and seemed to be really into his daughter,” said Edgerton.

Former neighbor Nikki Kujawa saw a very different side to the former Goshen policeman.  She recalls a a day where she heard Haitsma lose his temper with his seventy-year-old next door neighbor.

“I heard him yelling at her, because she is on an oxygen tank. He is like you go back in the house and I hope you keel over,” said Nikki Kujawa.

Kuwaja says she heard Haitsma yell at the woman he killed.

“They were in the garage and they heard the basement things to move out and they just kept arguing loud about I do not know what it was, but you could hear it,” said Kujawa.

Edgerton and Kujawa say they really feel for the family of Millicent Morros and Haitsma’s daughter.

“Prayers go out to them,” said Edgerton.

“I am very sorry,” said Kujawa.