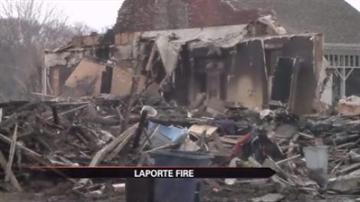 Four fire departments and over sixty fire fighters came together to battle the flames.

The house was built in the 1850's and over the years, the Sales family added on to it.

Sgt. Michael Kellems with the LaPorte County Sheriff's Department explained, "Because of that, it makes it difficult for the firemen to get at the seat of the fire and so they were able to do that with the use of an excavator."

Even once the walls were knocked down, it took thousands of gallons of water to quiet the fire.  Because this was such a challenging fire to fight, Red Cross was there to keep the firefighters fueled.

"So far we have gone through 120 hamburgers." said Bobbi Petru, Executive Director of the Red Cross LaPorte County.

All that remains of the home are memories. The Sales family says friends and family have been over to help them dig through some of the rubble.

They say there are very thankful for all of the support that the community has shown them, and they want it to be clear, that the wedding venue, the Red Barn Experience was not damaged in the fire.

The LaPorte County fire chief says it will be well into next week before we know exactly what caused the fire.