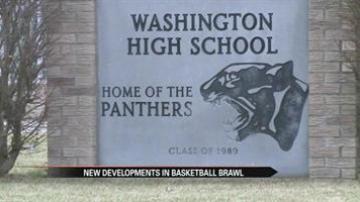 Video of Green allegedly punching Lexi Minix was posted to YouTube. The video has since been taken down.

Greg Briles, the superintendent of the Oregon Davis School Corporation, was at the game and he says the referees let the pushing and shoving get out of hand.

"Things got out of control. Once you get to a point where a punch has been thrown, you've overstepped the boundaries of sportsmanship," said Briles.

That is why Briles says the IHSAA should evaluate whether or not the referees were at fault.

"I think the officials need to take a good look at the game itself on film and see if there are areas that they can improve," said Briles.

Briles also wants a third party to evaluate whether Breondra Green or Lexi Minix should be disciplined.

Washington Coach Mo Scott said Green has been suspended for one game and may face further discipline.

Both Briles and Scott say they believe the referees are to blame.

"There are some extenuating circumstances before the actual punch so I think they are going to have to go back in the film and look at everything that happened that night before they give out any suspensions," said Briles.

We called the South Bend School Corporation and they said they have no comment.

We also contacted the IHSAA. We are waiting to hear back from them.