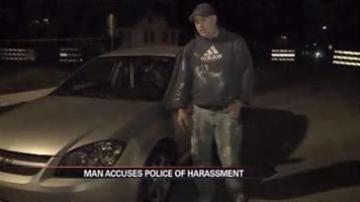 UPDATE: A 17-year-old has been arrested for the tire slashing incident.

"In regard to that investigation we determined that a 17-year-old youth actually did the tire slashing. We got an admission from this individual and we are awaiting charges,” said Captain Phil Trent of the South Bend Police Department.

We spoke with police Wednesday but they did not want to comment on the case.

When we asked them Thursday why they didn’t mention there was a suspect in the case Wednesday. They said the arrest wasn’t made until Thursday.

SOUTH BEND, Ind. --  A South Bend man is fuming over his tires being slashed while he was working at 7-Eleven and he said three police officers are to blame.

“One night, the cops slashed my tires,” said Johnathan Ferguson.

Ferguson said he could not believe it when he finished up his midnight shift at 7-Eleven and his tires were slashed.

“When they came in the second time, they said you might want to check your tires before you leave and I did not think anything of it,” said Ferguson.

Ferguson was even more shocked when he checked the stores’ surveillance video and the only people near his tire were three South Bend Police Officers.

“You can see all three of them bent down at my driver side tire and they were there for a good 15 seconds,” said Ferguson.

Ferguson said the cops were retaliating against him because he asked them a few months earlier to arrest a few drunk people who were in the store and the cops refused.

“They said, 'No we don’t want to have to do four or five hours of paperwork,'" said Ferguson. "So I told them South Bend cops were the laziest."

Ferguson said that tire cost him $120.

“That is a big chunk of change, especially when you are working two jobs just to make ends meet,” said Ferguson.

Ferguson wants to be reimbursed and he wants the officers involved to pay for what he said they did.

“They should be off work for a month without pay,” said Ferguson.