UPDATE: Man shoots ex-wife, then turns the gun on himself 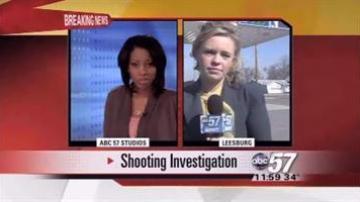 KOSCIUSKO COUNTY, Ind. – Surveillance videos shows a panicked woman run into Katie’s Kwik Mart around 5:30 Monday morning. 35-year-old Luselva Saavedra was being chased by her ex-husband, Ruben Saavedra, “She said I need help, call the cops.” The owner of the mart said L. Saavedra ran into the store, went behind the counter and locked the door.

R. Saavedra whipped his red pickup truck into the parking lot right behind his ex-wife. When he got inside, L. Saavedra has already locked herself behind the counter. Unable to get to his ex-wife, R. Savvedra waved the gun up over the tall countertop and fired one shot.

The Kwik Mart owner said it all happened very fast, “He shot her because she is standing right there by the sink, and she fell right there.”

L. Saavedra was shot in the back or the shoulder, the 35-year-old was airlifted to a hospital in Fort Wayne were she later died. The manager at the school dialed 9-1-1 but R. Saavedra immediately fled the scene; he ran out to his truck and drove about five miles to the Ivy Tech campus in Warsaw.

A police officer spotted his car and radioed for backup, when officers started to close in they realized the man in the driver’s seat, R. Saavedra was dead from a self-inflicted gunshot to the head. According to police, the man had no ties to the school and no one else was in the parking lot Monday morning. Classes at the college were suspended but resumed later in the afternoon.

“Something has escalated this to the point to where she had ran into the gas station to get help,” Sgt. Chad Hill with the Kosciusko County Sheriff’s Department said it’s still unclear what sparked this violent attack.

“Oh my goodness, I don’t know,” the Saavedra’s next door neighbor said the couple had separated years ago, “it’s been a long while now.”

The couple divorced but still lived on the same property in Milford, just feet apart. Their next door neighbor said, “I couldn’t figure out why he was living back there and she was living up there.” Ruben moved into a trailer in the back while Luselva Saavedra stayed in the trailer closest to the street with the couple’s children. Neighbors said the Saavedras had two or three children, girls either middle school or high school.

The couple lived about 8 minutes from Katie’s Kwik Mart; police said it was probably the only place that was open that early in the morning.  Their next door neighbor said she did not hear anything when she left for work just before 5 a.m. but did notice one thing, “I didn’t see her car, it’s usually there so just out of habit I looked and I didn’t see her car.”

The Saavedras neighbor said she was shocked, “I never seen them argue or fight or anything like that, nothing.” But according to police, this is not the first time R. Saavedra got violent with Luselva, Sgt. Chad Hill said, “They had some domestic problems prior to this and that’s what actually alluded to the ending of the divorce.”

Officers with the Milford Police Department told ABC-57 News that just last week, Luselva called the police in Goshen but no report was taken.

The Kosciusko County sheriff’s department is still interviewing friends, family, and witnesses to try to figure out what led up to the murder-suicide.